Quite honestly, I’ve liked the concept of Stargate ever since I first saw the original movie. Even if I didn’t think it was the greatest of movies itself, but certainly, the idea of it appealed to me. I remember watching the first episode of Stargate SG-1 and thinking back then, now this is the kind of extension to the original story that I wanted. Lucky for me and other Stargate fans, most of the time it really did deliver on that initial promise and we got 10 years of enjoyment from following SG-1’s adventures!

With the spin-off of Stargate Atlantis, we got another show filled with the same kind of themes as SG-1, more fun with ancient (but highly advanced technology), some great characters including Dr Rodney McKay himself! Although that said, it also had its faults, enemies that had a lot less character than the likes of the various very individual and colourful Goa’uld System Lords. There seemed to be lots of characters moving in and out of the show for various reasons, but that said I still feel that this show got cut short with it not being renewed after its 5th season.

Both SG-1 and Atlantis were great action-based fun shows that didn’t take themselves too seriously, I was always impressed and pleased with the humour the shows had, they were fairly easy going to watch, but usually good fun too. Now we’ve got another Stargate spin-off in the form of Stargate Universe, but this one’s a lot more grown-up in look and feel compared to its predecessors. In just the first few episodes you can see that this is a different show…very different from what has gone before!

From the first episode, Stargate Universe seems darker and grittier in terms of story and the general look and feel of the setting, the themes seem more adult or perhaps it’s more to do with the way the show is written to be more character focussed. You can’t help but think this has been influenced by shows like the recent Battlestar Galactica series.

For instance, Dr Rush, played by Robert Carlyle – a brilliant character actor of film and TV, I’ve always liked watching his acting performances ever since I first watched him in the BBC series Hamish MacBeth! Having actors of his calibre not only adds credibility to the show as a whole but makes for great viewing as you clearly know that Dr Rush is not trustworthy. The only question is to what degree that extends and where he’ll end up because of it.

Using the pre-established body-swap technology from SG-1 gives the ability to do the exploration of character background stories, almost in a Lost flashback/forward/alternate timeline style with a Quantum Leap twist in having someone else’s body. It certainly provides a change from the darkness of the ship and the empty spaces of the planets they’ve visited so far.

In terms of the writing, I find it interesting how in the Sun/Power episode, there was no rushing around and finding a clever science solution at the last second to save the ship, rather the episode focussed on the crew acceptance of their imminent deaths. Also, the “Time” episode had an interesting viewpoint to tell the story from and also by not fully completing the episode, they leave it to the audience to assume how it eventually gets resolved. Very different from the usual stand-alone Stargate episodes of the previous shows that usual had a definitive ending. 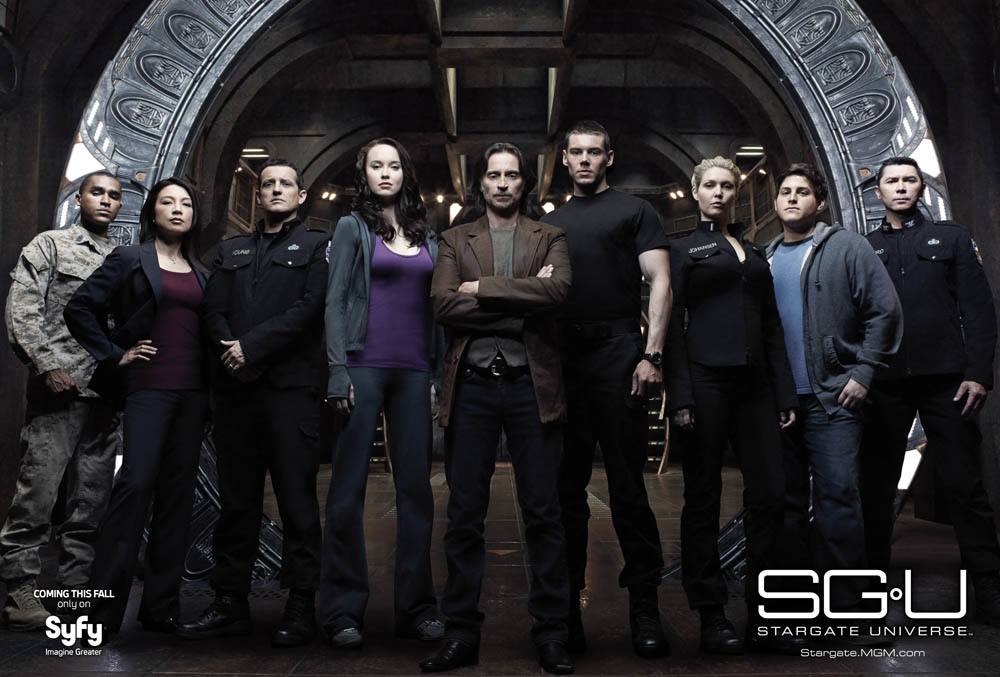 Overall, I rather like watching this first season of Stargate Universe, having seen the first ten episodes so far, it’s done a good job of introducing the characters and situation, in a gritty, serious, adult and fairly slow-moving manner. There haven’t been huge amounts of action as yet (in fact it’s been pretty slow going), but the quality of the actors that the producers have cast shows through. I just hope it moves along a bit more in the rest of the 1st season.

Also, I’m hoping that the way in which the show has begun (ie. slowly), hasn’t put off a lot of traditional and new viewers alike. As I’m sure that this grown-up, more serious Stargate Universe has some great characters with the possibility to tell some great stories and arcs. If only it’s allowed to keep going…a season 2 has been given the green light. But I suppose it all depends whether they’ll stick with the current format regardless of the viewing figures or move it more towards SG-1 and Atlantis if the ratings don’t improve over the next year. Hopefully, over the course of the whole series, it will have a more coherent plotline and conclusion that what Lost series had with their finale.

Have you seen the first half of season 1 of Stargate Universe? If not, take a look at the Stargate Universe season 1 trailer below. What do you think about it? Should they have stuck with a winning formula that they had with SG-1 and Atlantis?